My first article Intel CPUs is a general introduction on modern CPU technologies having an impact on benchmarks.

This second article is much more concrete with numbers and a concrete bug having a major impact on benchmarks: a benchmark suddenly becomes 2x faster!

I will tell you how I first noticed the bug, which tests I ran to analyze the issue, how I found commands to reproduce the bug, and finally how I identified the bug.

Last week I ran a benchmark to check if enabling Profile Guided Optimization (PGO) when compiling Python makes benchmark results less stable. I recompiled Python 5 times, and after each compilation I ran a benchmark. I tested different commands and options to compile Python. Everything was fine until the last benchmark of the last compilation. The benchmark suddenly became 2 times faster.

Hopefully, my perf module collects a lot of metadata. I was able to analyze in depth what happened.

Well, at this point, it's hard to correlate for sure an event with the major performance change.

Impact of Turbo Boost on benchmarks

I ran the bm_call_simple.py microbenchmark (CPU-bound) of performance 0.2.2.

Hum, I don't think that Turbo Boost can explain the bug.

Impact of the CPU temperature on benchmarks

Burn the CPU of my desktop PC

I used my system_load.py script to generate a system load higher than 10.

When the fan is cooling correctly the CPU, all CPU run at 3.4 GHz (Turbo Boost was disabled) and the CPU temperature is 66°C.

I used a simple sheet of paper to block the fan of my CPU. Yeah, I really wanted to burn my CPU! More seriously, I checked the CPU temperature every second using the sensors command and was prepared to unblock the fan if sometimes gone wrong. 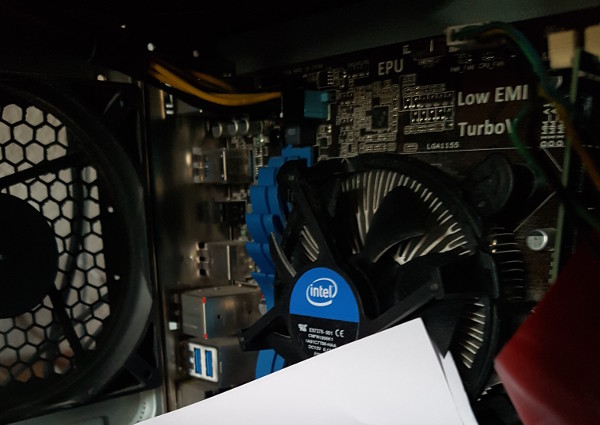 After one minute, the CPU reached 97°C. I expected a system crash, smoke or something worse, but I was disappointed. At 97°C, I was still able to use my computer as everything was fine. The CPU was slowly down automatically to the minimum CPU frequency: 1533 MHz according to turbostat (the minimum frequency of this CPU is 1.6 GHz).

When I unblocked the fan, the temperature decreased quickly to go back to its previous state (62°C) and the CPU frequency quickly increased to 3.4 GHz as well.

My Intel CPU is really impressive! I didn't expect such very efficient protection against overheating!

I used my system_load.py script to get a system load over 200. I also opened 4 tabs in Firefox playing Youtube videos to stress also the GPU which is integrated into the CPU (IGP) on such laptop. 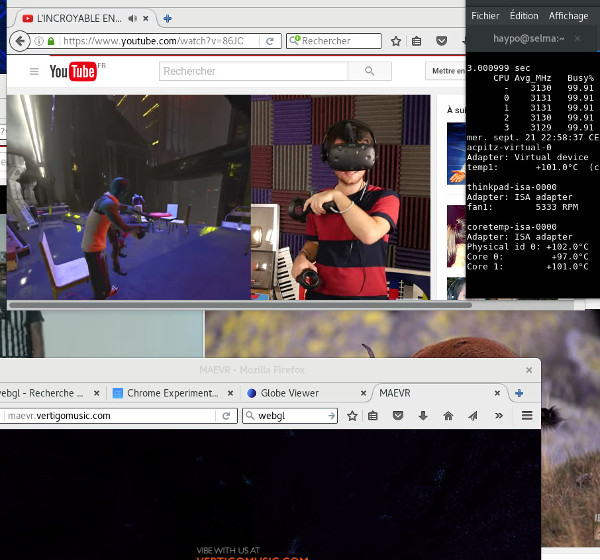 With such crazy stress test, the CPU temperature was "only" 83°C.

Using a simple tissue, I closed the air hole used by the CPU fan. When the CPU temperature increased from 100°C to 101°C, the CPU frequency started slowly to decrease from 3391 MHz to 3077 MHz (with steps between 10 MHz and 50 MHz every second, or something like that).

When pushing hard the tissue and waiting longer than 5 minutes, the CPU temperature increased up to 102°C, but the CPU frequency was only decreased from 3.4 GHz (Turbo Mode with 4 active logical CPUs) to 3.1 GHz.

The maximum frequency is 2.9 GHz. Frequencies higher than 2.9 GHz means that the Turbo Mode was enabled! It means that even with overheating, the CPU is still fine and able to "overclock" itself!

Again, I was disapointed. With a CPU at 102°C, my laptop was still super fast and reactive. It seems like mobile CPUs handle even better overheating than desktop CPUs (which is not something suprising at all).

Impact of the CPU frequency on benchmarks

I ran the bm_call_simple.py microbenchmark (CPU-bound) of performance 0.2.2 on my desktop PC.

Command to set the frequency of CPU 0 to the minimum frequency (1.6 GHz):

Command to set the frequency of CPU 0 to the maximum frequency (3.4 GHz):

Bug reproduced and then identified in the Linux CPU driver

Two days ago, I ran a very simple "timeit" microbenchmark to try to bisect a performance regression in Python 3.6 on functools.partial. Again, suddenly, the microbenchmark became 2x faster!

But this time, I found something: I noticed that running or stopping cpupower monitor and/or turbostat can "enable" or "disable" the bug.

After a lot of tests, I understood that running the benchmark with turbostat "disables" the bug, whereas running "cpupower monitor" while running a benchmark enables the bug.

I reported the bug in the Fedora bug tracker, on the component kernel: intel_pstate C0 bug on isolated CPUs with the performance governor and NOHZ_FULL.

The issue is not fully analyzed yet, but at least I succeeded to write a list of commands to reproduce it with a success rate of 100% :-) Moreover, the Intel engineer suggested to add an extra parameter to the Linux kernel command (rcu_nocbs=3,7) line which works around the issue.

This article describes how I found and then identified a bug in the Linux driver of my CPU.

To get stable benchmarks, the safest fix for all these issues is probably to set the CPU frequency of the CPUs used by benchmarks to the minimum. It seems like nothing can reduce the frequency of a CPU below its minimum.