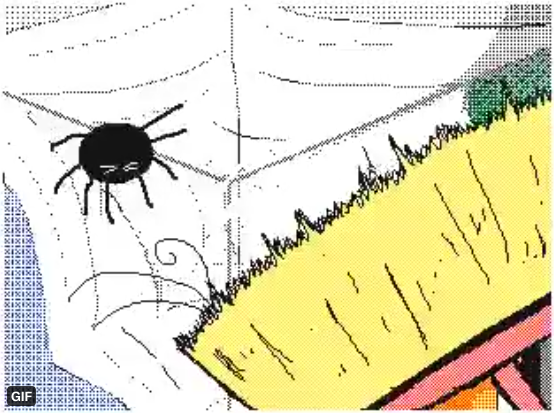 The PyObject structure prevents indirectly to optimize CPython. We will see why and how I prepared the C API to make this structure opaque. It took me 1 year and a half to add functions and to introduce incompatible C API changes (fear!).

I converted the Py_TYPE() macro to a static inline function, but my change was reverted twice. I had to fix many C extensions and fix a test_exceptions crash on Windows to be able to finally merge my change in September 2021.

Finally, we will also see what can be done next to be able to fully make the PyObject structure opaque.

Thanks to Dong-hee Na, Hai Shi and Andy Lester who helped me to make these changes, and thanks to Miro Hrončok who reported C extensions broken by my incompatible C API changes.

This article is a follow-up of the Make structures opaque in the Python C API article.

Drawing: "A spider in my bedroom" by Kéké

The C API allows to access directly to structure members by deferencing an PyObject* pointer. Example getting directly the reference count of an object:

The ability to dereference a PyObject* pointer prevents optimizations which avoid inefficient boxing/unboxing, like tagged pointers or list strategies.

Tagged pointers require adding code to all functions which currently dereference object pointers. The current C API prevents doing that in C extensions, since pointers can be dereferenced directly.

Since all Python object structures must start with a PyObject ob_base; member, it is not possible to make other structures opaque before PyObject is made opaque. It prevents implementing PyPy list strategies to reduce the memory footprint, like storing an array of numbers directly as numbers, not as boxed numbers (PyLongObject objects).

Being able to dereference a PyObject** pointer also prevents to move objects in memory. A moving garbage collector can compact memory to reduce the fragmentation. Currently, it cannot be implemented in CPython.

If objects would only be referenced by opaque handles, as the HPy project does, it would be possible to copy the object from the stack to the heap memory, when the object is added to the list.

The PyObject structure has a reference count (ob_refcnt member), whereas reference counting is a performance bottleneck when using the same objects from multiple threads running in parallel. Quickly, there is a race for the memory cacheline which contains the PyObject.ob_refcnt counter. It is especially true for the most commonly used Python objects like None and True singletons. All CPUs want to read or modify it in parallel.

This problem killed the Gilectomy project which attempted to remove the GIL from CPython.

A tracing garbage collector doesn't need reference counting, but it cannot be implemented currently because of the PyObject structure.

My initial plan was to make the PyObject structure fully opaque in the C API.

In Python 3.8, Py_REFCNT() and Py_TYPE() macros can be used to set directly an object reference count or an object type:

Such syntax requires a direct access to PyObject.ob_refcnt and PyObject.ob_type members as l-value.

In Python 3.9, I also added Py_IS_TYPE(obj, type,) helper function to test an object type. It is equivalent to: Py_TYPE(obj) == type.

Static inline functions still access directly PyObject and PyVarObject members at the ABI level, and so don't solve the initial goal: "make the PyObject structure opaque". Not accessing members at the ABI level can have a negative impact on performance and I prefer to address it later. I already get enough backfire with the other C API changes that I made :-)

I kept the Py_REFCNT() change since it only broke a single C extension (PySide2) and it was simple to update it to Py_SET_REFCNT().

I created the pythoncapi_compat project to provide the following functions to Python 3.8 and older:

I also wrote a upgrade_pythoncapi.py script to upgrade C extensions to use these functions, without losing support for Python 3.8 and older.

Using the pythoncapi_compat project, I succeeded to update multiple C extensions to prepare them for Py_TYPE() becoming a static inline function.

In June 2021, during the Python 3.11 devcycle, I changed again Py_TYPE() and Py_SIZE() since most C extensions have been fixed in the meanwhile.

Problem: test_recursion_in_except_handler() of test_exceptions started to crash on a Python debug build on Windows: see bpo-44348.

Since nobody understood the issue, it was decided to revert my change again to repair buildbots.

I proposed to enable compiler optimizations when building Python in debug mode on Windows, to inline calls to static inline functions like Py_TYPE(). This idea was rejected, since the debug build must remain fully usable in a debugger.

I looked again at the crash and found the root issue. test_recursion_in_except_handler() creates chained of exceptions. When an exception is deallocated, it calls the deallocator of another exception, etc.

I proposed a change to use the trashcan mechanism. It limits the call stack to 50 function calls. I checked with a benchmark that the performance overhead is acceptable. My change fixed the test_exceptions crash!

Since most C extensions have been fixed and test_exceptions is fixed, I was able to change Py_TYPE() and Py_SIZE() for the third time. My final commit: Py_TYPE becomes a static inline function.

I changed the issue topic to restrict it to adding functions to access PyObject members. Previously, the goal was to make the PyObject structure opaque. It took 1 year and a half to add made all these changes.

What's Next to Make PyObject opaque?