The good news is that I made great progress, I fixed most random failures. A random fail now became the exception rather than the norm. Some issues were not bugs in tests, but real race conditions in the code. It's always good to fix unlikely race conditions before users hit them on production!

CPython is running a Buildbot server for continuous integration, but tests are run as post-commit: see Python buildbots. CPython is tested by a wide range of buildbot slaves:

There are different kinds of tests:

Python is tested in different configurations:

There is also custom, a special branch used by core developers for testing patches.

The buildbot configuration can be found in the buildmaster-config project (start with the master/master.cfg file).

Note: Thanks to the migration to GitHub, Pull Requests are now tested on Linux, Windows and macOS by Travis CI and AppVeyor. It's the first time in the CPython development history that we have automated pre-commit tests!

Orange Is The New Color

My first change was to modify the buildbot configuration to extract warnings from the raw test output to create a new "warnings" report, to more easily detect warnings and tests failing randomly (test fail then pass when re-run). 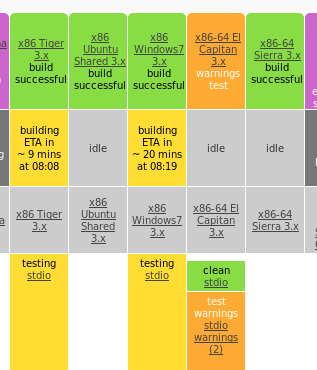 Extract of the current master/custom/steps.py: 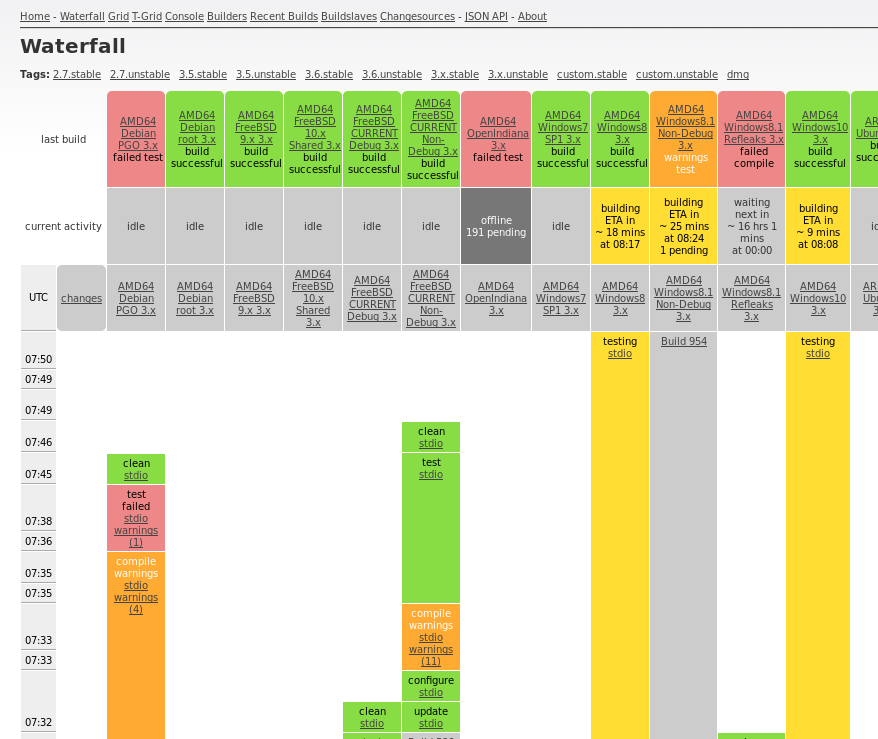 The screenshot is obviously truncated since the webpage is giant: I have to scroll in all directions... It's not convenient to check the status of all builds, detect random failures, etc.

We also have an IRC bot reporting buildbot failures: when a green (success) or orange (warning) buildbot becomes red (failure). I wanted to have the same thing, but by email. Technically, it's trivial to enable email notification, but I never did it because buildbots were simply too unstable: most failures were not related to the newly tested changes.

But I decided to fix all buildbots issues, so I enabled email notification (bpo-30325). Since May 2017, buildbots are now sending notifications to a new buildbot-status mailing list.

Unit tests versus real life :-) (or "software versus hardware")

Fixing buildbot issues can be boring sometimes, so let's start with a funny bug. At June 25, Nick Coghlan wrote to the python-buildbots mailing list:

It looks like the FreeBSD buildbots had an outage a little while ago, and the FreeBSD 10 one may need a nudge to get back online (the FreeBSD Current one looks like it came back automatically).

The reason is unexpected :-) Kubilay Kocak, owner of the buildbot, answered:

Vacuum cleaner tripped RCD pulling too much current from the same circuit as heater was running on. Buildbot worker host on same circuit.

I opened at least 50 issues to report random buildbot failures. In the middle of these issues, you can find bpo-30371:

Watch this space, but I'm pretty sure that it is (was) bad memory.

He fixed the issue:

That's the real problem, I'm not sure it's the memory, but it does have the symptoms. And that is why my buildbot was down earlier, I was attempting to determine the bad stick and replace it.

To fix test warnings, I enhanced the test suite to report more information when a warning is emitted and to ease detection of failures.

A major change is the new --fail-env-changed option I added to regrtest (bpo-30764): make tests fail if the "environment" is changed. This option is now used on buildbots, Travis CI and AppVeyor, but only for the master branch yet.

I backported all these changes to the 2.7, 3.5 and 3.6 branches to make sure that warnings are fixed in all maintained branches.

As usual, I spent time our specialized test runner, regrtest:

But the most complex task was to backport all regrtest features and enhancements from master to regrtest of 3.6, 3.5 and then 2.7 branches.

In Python 3.6, I rewrote regrtest.py file to split it into smaller files a in new Lib/test/libregrtest/ library, so it was painful to backport changes to 3.5 (bpo-30383) which still uses the single regrtest.py file.

In Python 2.7 (bpo-30283), it is even worse. Lib/test/regrtest.py uses the old getopt module to parse the command line instead of the new argparse used in 3.5 and newer. But I succeeded to backport all features and enhancements from master!

Python 2.7, 3.5, 3.6 and master now have almost the same CLI for python -m test, almost the same features (except of one or two missing feature), and should provide the same level of information on failures and warnings.

As expected, the longest section here is the list of changes I wrote to fix all buildbot failures and warnings:

I wanted to fix all buildbot issues of all branches including 2.7, whereas I didn't touch much the Python 2.7 code base last months (last years???). The first six months of 2017, I backported dozens of commits from master to 2.7!

For example, I added AppVeyor on 2.7: a Windows CI for GitHub!

I also backported many fixes wrote by other developers, including old fixes up to 8 years old!

Usually, finding the proper fix takes much more time than the cherry-pick itself which is usually straighforward (no conflict, nothing to do). I am always impressed that Git is able to detect that a file was renamed between Python 2 and Python 3, and applies cleanly the change!

Example of backports from master to 2.7: