This article is about old reference leaks discovered or caused by the work on isolating subinterpreters: leaks in 6 different modules (gc, _weakref, _abc, _signal, _ast and _thread). 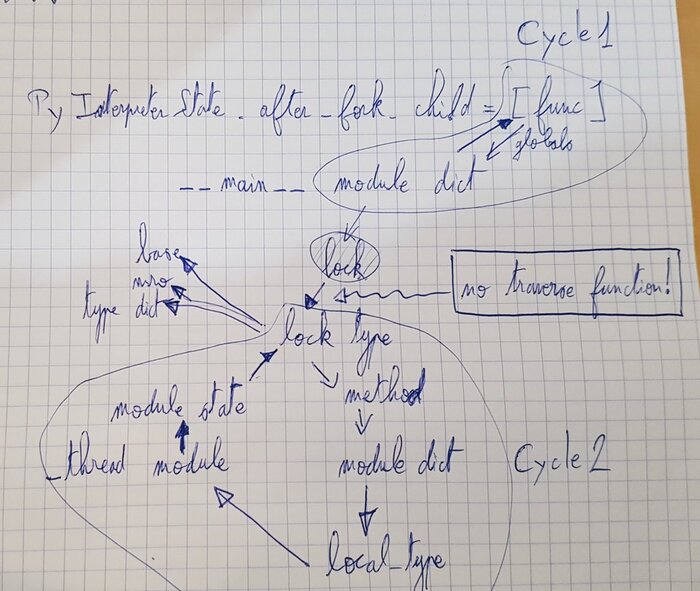 With my work on isolating subinterpreters, old bugs about Python objects leaked at Python exit are suddenly becoming blocker issues on buildbots.

When subinterpreters are better isolated, objects are no longer shared, and suddenly these leaks make subinterpreters tests failing on Refleak buildbots. For example, when an extension module is converted to the multiphase initialization API (PEP 489) or when static types are converted to heap types, these issues pop up.

It is a blocker issue for me, since I care of having only "green" buildbots (no test failure), otherwise more serious regressions can be easily missed.

In November 2019, I made the state of the GC module per-interpreter in bpo-36854 (commit) and test_atexit started to leak:

I fixed the usage of the PyModule_AddObject() function in the _testcapi module (commit).

I also pushed a workaround in finalize_interp_clear():

I dislike having to push a "temporary" workaround, but the Python finalization is really complex and fragile. Fixing the root issues would require too much work, whereas I wanted to repair the Refleak buildbots as soon as possible.

In December 2019, the workaround was partially removed (commit):

The year after (December 2020), the last GC collection was moved into PyInterpreterState_Clear(), before finalizating the GC (commit).

In March 2020, the _weakref module was ported to the multiphase initialization API (PEP 489) in bpo-40050 and test_importlib started to leak:

The analysis was quite long and complicated. The importlib imported some extension modules twice and it has to inject frozen modules to "bootstrap" the code.

At the end, I fixed the issue by removing the now unused _weakref import in importlib._bootstrap_external (commit). The fix also avoids importing an extension module twice.

In April 2020, the static types of the _abc extension module were converted to heap types in bpo-40077 (commit) and test_threading started to leak:

In March 2019, the PyObject_Init() function was modified in bpo-35810 to keep a strong reference (INCREF) to the type if the type is a heap type (commit):

I opened bpo-40217: The garbage collector doesn't take in account that objects of heap allocated types hold a strong reference to their type to discuss the regression (the test_threading leak).

It was only a workaround which helped to understand the issue, it was not merged.

I merged a first fix: add a traverse function to the _abc._abc_data type (commit):

Second workaround (not merged): visit the type in abc_data_traverse()

A second workaround was identified: add Py_VISIT(Py_TYPE(self)); to the new abc_data_traverse() function.

Again, it was only a workaround which helped to understand the issue, but it was not merged.

20 days after I opened bpo-40217, Pablo Galindo modified PyType_FromSpec() to add a wrapper around the traverse function of heap types to ensure that Py_VISIT(Py_TYPE(self)) is always called (commit).

In May 2020, Pablo Galindo changed his mind. He reverted his PyType_FromSpec() change and instead fixed traverse function of heap types (commit).

At the end, abc_data_traverse() calls Py_VISIT(Py_TYPE(self)). The second "workaround" was the correct fix!

In September 2020, Mohamed Koubaa ported the _signal module to the multiphase initialization API (PEP 489) in bpo-1635741 (commit 71d1bd95) and test_interpreters started to leak:

I created bpo-41713 to track the regression. Since I failed to find a simple fix, I started by reverting the change which caused Refleak buildbots to fail (commit).

I had to refactor the _signal extension module code with multiple commits to fix all bugs.

The first fix was to remove the IntHandler variable: there was no need to keep it alive, it was only needed once in signal_module_exec().

The second fix is to close the Windows event at exit:

The last fix, the most important, is to clear the strong reference to old Python signal handlers when signal_module_exec() is called more than once:

The _signal module is not well isolated for subinterpreters yet, but at least it no longer leaks.

This change caused 3 different bugs including crashes (bpo-41194, bpo-41261, bpo-41631). The issue is complex since there are public C APIs which require to access AST types, whereas it became possible to have multiple _ast extension module instances.

A global state is bad for subinterpreters. In November 2020, I made the AST state per-interpreter in bpo-41796 (commit and test_ast started to leak:

The fix is to call _PyAST_Fini() earlier (commit).

Python types contain a reference to themselves in in their PyTypeObject.tp_mro member (the MRO tuple: Method Resolution Order). _PyAST_Fini() must called before the last GC collection to destroy AST types.

In December 2020, while I tried to port the _thread extesnion module to the multiphase initialization API (PEP 489), test_threading started to leak:

As usual, the workaround was to force a second GC collection in interpreter_clear():

There are two cycles:

Moreover, there is a link between these two reference cycles: an instance of the lock type.

I fixed the issue by adding a traverse function to the lock type and add Py_TPFLAGS_HAVE_GC flag to the type (commit):

Thanks Pablo Galindo for helping me to debug all these tricky GC bugs!

Thanks to everybody who are helping to better isolate subintrepreters by converting extension modules to the multiphase initialization API (PEP 489) and by converting dozens of static types to heap types. We made huge progresses last months!